Patrick Gong is Sara Lin’s best friend and previous crush. They attend the same high school and are in the same class. He's spiraled Sara in a string of bets that usually end up giving him a little extra pocket change.

Sometime prior to the series, Sara confessed her love to him. Patrick didn’t reciprocate those feelings and ultimately rejected her. They decided to remain best friends anyway.

A prankster at heart, Patrick has a tendency to pick on Sara, and pretty much everyone else, as often as possible. He's rather full of himself and will flirt with Rose whenever she approaches him (despite repeatedly telling him she's not interested), but it's unsure if he's seriously interested in her. Despite constantly picking on Sara, he truly does care for her well-being and even kisses her just so she doesn't lose a bet they made that would have led her to quitting the Newspaper Club.

At 5'9"[1], Patrick is of average height. He is lean with brown hair, strikingly blue "ocean" eyes, and large eyebrows. 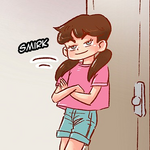 Episode 38 — "Boys and their Feelings"

Retrieved from "https://the-kiss-bet.fandom.com/wiki/Patrick_Gong?oldid=649"
Community content is available under CC-BY-SA unless otherwise noted.